The idea of exhibiting or building a museum itself stems from the individual expressions of artists and sophisticated intellectuals. However, there are certain exceptions, favoring both the art, aesthetics, architecture and commemoration. Anıtkabir (literally, “memorial tomb”) is the mausoleum of Mustafa Kemal Ataturk, the founder of the Modern Republic of Turkey. The museum tomb is situated in the capital city, Ankara, and “was designed by architects Professor Emin Onat and his team, who were selected from 48 others from several countries in a worldwide contest,” organized by the then government (“Ataturks Museum”; Wilson 7). In this assignment, the background, critique, and analysis of the historic museum tomb, Anıtkabir, has been presented. The paper offers insights into the purpose, perspective, evidence, analysis, core values, decision-making, organization, and conventions.

The intention behind building such a museum-tomb was to commemorate Ataturk (literally, "father of Turks"), who was the leader of the Turkish War of Independence (Wilson 6). Not only founded the Modern Republic, but Ataturk also developed the Republic with modern reforms (e.g., women's rights to vote, Latin alphabet) long before many European nations. Today, there are more than fifty memorials of Ataturk in many countries, including the U.S., Germany, Brazil, and the U.K., and he is considered one of the most exceptional and visionary leaders of the 20th century (Wilson 12). One can readily interpret the need and impulse of Turkish citizens building such a vast, architectural, and meaningful tomb museum in the capital, with the whole city view at all angles, on a 750,000 m2 forest land, just like their founder adored the nature.

Anıtkabir is a museum of arts, history, architecture, and the womb of a great leader. From the architectures’ perspective, one can readily sense the commemoration and attribution to the great leader as there are four different parts of the museum; the Road of Lions, the Ceremonial Plaza, the Hall of Honor (tomb and huge blocks), and the Peace Park that surrounds the museum, which is visually referenced to his determination and courage, respectability, commemoration, and Ataturk's passion for nature and peace, respectively. The Peace Park is a linguistic and visual reference to his character, as can be understood from his famous quote, "Peace at Home, Peace in the World." 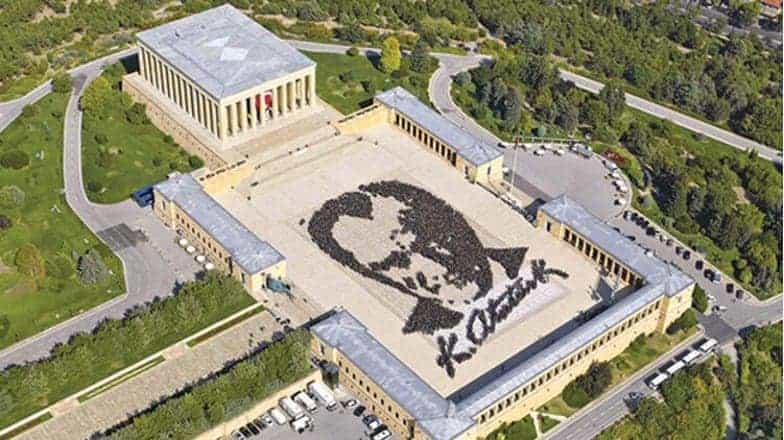 The site can be merely defined by “a Turkish architectural style called the Second National Architectural Movement” (“Ataturk Mausoleum,” para. 7). In terms of specific photographic evidence, blocks used in the museum are composed of marble and travertines, specifically from different corners of the country. The two huge blocks supporting the Hall of Honor are 40 tones each and describing elements of the style of the ancient Hittite Empire. According to Wilson, the room “with the sarcophagus of Atatürk’s tomb has an octagonal plan in Ottoman and Seljuk architectural styles, and its pyramid ceiling is inlaid with gold mosaics (27). 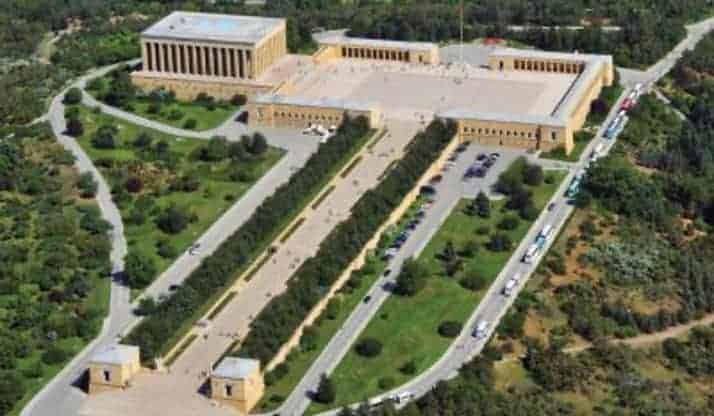 The Road of Lions and the Hall of Honor

In this vast museum and exhibition, the architects seem to reflect the cultural traits, history, and architecture of the nation by simultaneously commemorating their founding father. The tomb is also surrounded by an underground museum depicting the history, art, aesthetic, reforms, and revolutions of the nation in such an architectural-chronological formation that the visitors reach to the tomb after seeing all the history, art, and architecture. In other words, the formation of architecture merely enables visitors to experience the chronological timeline of the past and creativity of a nation, along with the personality of Ataturk, and finally, visitors end up in the entrance of the Hall of Honor, where the tomb is situated. 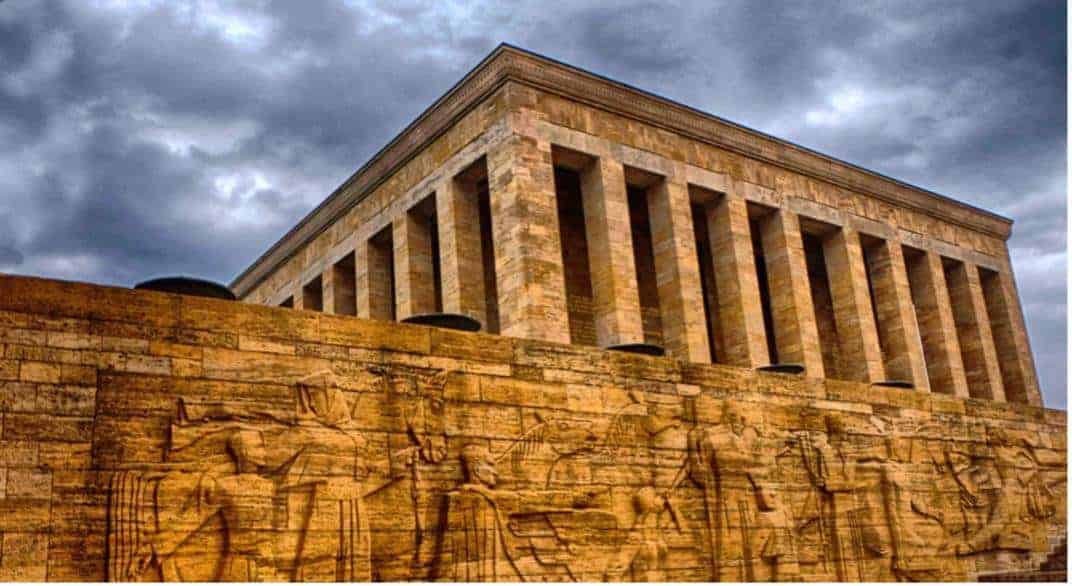 The museum's primary value and theme are expressing the gratitude and respect to the founder by exhibiting the values, architecture, and history of the nation ("Ataturk's Museum"). In this sense, one can see that the architectural elements such as lion statues, the Peace Park, and the chronological underground museum are designed to value core values. Also, specific decisions by the architect Emin Onat were made; for instance, he decided to use domestic marble and travertines from various corners of the country to highlight the leader's comprehensive approach; that is, to express that he was the leader of every individual in the country regardless of race, gender, age, or belief, just as he decided to name the Peace Park to attribute the love of nature and peace.

After all, Anıtkabir is a collective exhibition of a nation’s emotional commitment, respect, and gratitude to its founding father. The museum includes many historical, aesthetic, mythological, and architectural elements that are all correlated to each other to convey each part of four. Chronologically, the journey starts from the Roads of Lions, museums and exhibitions, the Hall of Honor, and finally the Peace Park, just as Ataturk always said before dodging the second World War, "Peace at Home, Peace in the World."