Italy, with a population of 60 million citizens, has the third-largest economy in the European Union. Compared to the world, it has the 8th largest economy by nominal GDP and 12th largest economy by GDP (“Italy,” 2019; “Italy-Overview of Economy,” 2019). By only looking at the numbers, one could infer that the country, with its large power in both industry and export sector, is a great place to live. However, when looking at a country economically, one should also look for its political roots as numbers can hide many things underneath. In this paper, I will examine the country from an individual’s perspective instead of an international one.

Italy has a huge history, as a matter of fact, it is the homeland of one of the most advanced states in history (“Italy,” 2019; “Italy-Overview of Economy,” 2019). Just like any other country, Italy’s government and society shaped around its history, and thankfully, a history with relics from Papacy, the Roman Empire and the Renaissance helped the country more than others (“Italy,” 2019). A great example of history affecting today is the fact that Italy is a democratic republic (“Italy,” 2019). The symbol of its government contains parts from the Roman Empire and Latin language. Although Italy was under a ruling monarch during the Second World War, after the end, the new Italian Constitution openly stated that it is a democratic republic and the country belongs to the people along with the limits of the constitution.

This First Article of the Italian Constitution made sure that the country does not belong to a monarch, on the country, it belongs to every one of its citizens, and the heads of state that are chosen by people do not own the country, they are just servants working for the people and the greater good. A great way to explain this concept is to say that Italy is a Res Publica. The head of state, like most other countries, is also the commander-in-chief in the time of war. Yet, one thing that is different from other countries is that the head of state serves for seven years after being elected. It should also be noted that the President can not involve in politics and can just be a guarantee for a just political environment. If an absolute majority is met, the Parliament has the power to impeach the President for high treason or any violation of the Constitution.

The Constitution of Italy, although sounds like it created a strong base for democracy and equality, has many underlying flaws. Corruption, for instance, is so common that in the Eurozone, Italy is considered one of the most corrupt countries (Webb, 2016). According to Transparency International’s Corruption Perception Index, individual corruption in the way of paying bribes to authorities only happens in 5% of the population (Webb, 2016). The main root of corruption comes from political parties, public officials, and the Parliament. One should also keep in mind that Italy’s corruption rate is in par with Saudi Arabia.

This problem also affects individual businesses as I will explain later on the paper. Organized crime rates in the country work with officials to survive, and crime groups are considered the biggest danger for business. In a survey targeted to individuals, it has been found that the majority of people believe that corruption is more than before and the government’s policy to counter it is not working. It has come to such a point that people have accepted corruption as a part of their livelihood like Russia (Webb, 2016). However, one interesting fact about this issue is that Mafia and organized crime families started off as guarantors for citizens because the state was not strong enough, and after time, they started managing everything.

As shown in Figure 1, starting a business, therefore, is not as free and safe as other countries. Apart from calculating business risks and the supply and demand of the given area, business owners should also look out for organized crime families. The term “look out for” is not used in its actual sense, however, because there is almost no way of escaping them. Therefore, businesses look for crime families they can trust and pay them extra fees to protect their business from other families. 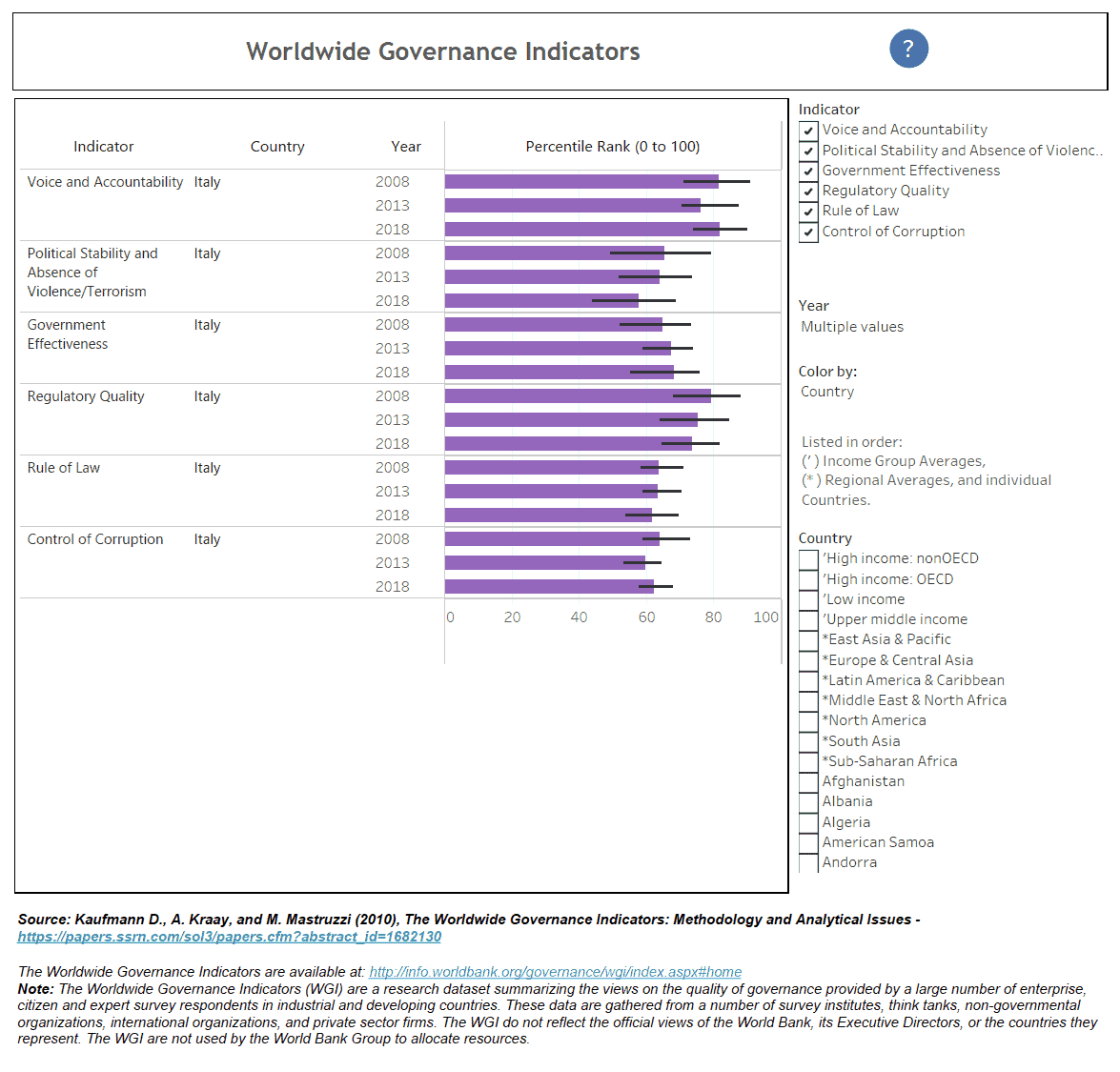 Keeping this in mind, one could easily conclude that the business environment is not safe. Domestic products and services are highly encouraged, and even if the product or service belongs to a foreign company, they must comply with the domestic rules put by the state. Yet, it should also be kept in mind that the authority crime families hold weigh more than the national requirement or encouragements.

Because of the reasons I have stated above, the economy of Italy is not free. On the contrary, it is way below the EU average, and at the middle in the world average (“Italy-Overview of Economy,” 2019). The administration acknowledges this problem that is present in its economy, yet, because its priority policies are aimed towards minimum wages and increasing spending in research and education, the current status does not look like it has any goal of improving soon (“Italy-Overview of Economy,” 2019). In the past, Italy had a strong free-market economy, and it looked promising, however, because of the disruptions created by the government, many cracks started to appear at its economic structure.

By the early 1990s, with the enormous debt created by government workers created such a snowball effect that its effects are still present in the overall freeness of the economy (“Italy-Overview of Economy,” 2019). The rule of law has also been distorted by the presence of organized crime, and according to independent polls, most people trust mafia more than they trust their government.

This problem, if let loose for more, can put the country in an irrecoverable state. I believe that none of the countries in the EU is ready for another revolution. A smart recommendation to strengthen would be to get help from the EU both economically and structurally, but the COVID-19 pandemic has shown us that Italy lost its faith in the European Union and it is speculated by many researchers that Italy can be the second example of a BREXIT case.

In conclusion, Italy, with its deep historical roots, showed a lot of promise to investors in the late 1990s. Its crime problem, however, has been ignored and sometimes even supported to such a point that it has become a part of Italy’s culture. It is common knowledge that the economy, especially a free economy, is the most important part of a country. Because Italy’s individual businesses are interrupted by its internal instability, it can, and will, lead to long-term problems that are prone to turn into irrecoverable problems.

Italy - Overview of the economy. (2019) from https://nationsencyclopedia.com